DEVELOPED SECTION for AutoCAD or BricsCAD 1.8
+ Extract multiple PDF from a DWG

An add-on for AUTOCAD or BricsCAD, which determines the developed (unfolded) section of one set of 3DSOLID, 3DMESH or 3DFACE entities and vertical plans passing through a 2D POLYLINE which may contain arcs, in XOY plane. A new command in AutoCAD, very useful for the designers, is added by this program.

There is also the option not to perform the unfolding. An example of use is the checking of the gauge underneath a passage, in a roundabout (see Example 3, shown below).
You can actually make the section along any curve. The curve must first be approximated with a Polyline. Section can be wrapped or unwrapped.

Two viewports for printing are created, with the dimensions specified by the user. The first viewport contains the initial view and the second contains only the section, in the unwrapped plan.

You can set also the “concatenation precision” of the segments of intersection.

Extract multiple PDF from a DWG

There is also another command that generates drawings in PDF format, for several rectangular areas from a DWG. Without this new command you would have wasted time, manually entering the PLOT command and its options, in repeatedly. 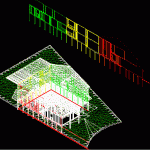 You can also purchase the Lisp sources of this program.

DEVELOPED SECTION of a bridge

DEVELOPED SECTION of the walls of a house

DEVELOPED SECTION in a separate viewport 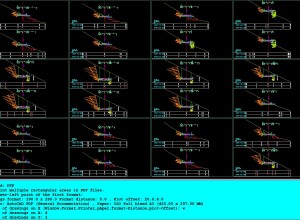 Extract multiple PDF from a DWG 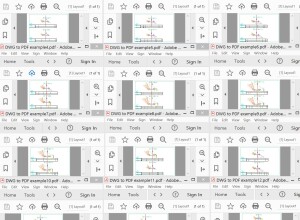 PDF files from a DWG