3D CNC milling from DXF
VDAFS to DXF and NC Converter and Viewer 2.8

Converts VDAFS file to DXF file (in 3DFACE entities) and generates the NC program for milling a piece composed from 3DFACE entities, by some paths parallel to the machine axis.

VDA-FS is a CAD data exchange format for the transfer of surface models from one CAD system to another. Its name stands for Verband der Automobilindustrie – Flächenschnittstelle, which translates to the organisation of the automotive industry – surface translation format. Standard was specified by the VDA German organisation.

3DFACE entities may also result from 3DFACE or 3DMESH entities from DXF files, from STL ASCII files generates by AutoCAD for solids and from RCAD “3DFace” command.

3DFace entities which describe the surface can be intersected or not perfectly joined! The milling cutter with semispherical head will be always above and tangent to the assembly of 3DFace entities!
You can divide the piece into 2 parts through a horizontal separation plane or through a certain separation surface and you can calculate 3D area, volume and center of gravity of some bodies limited by 3DFACE entities.

The intersection with a horizontal plane and the separation (SEParate command)

NC milling of the lower part of the mould

NC milling of the top part of the mould 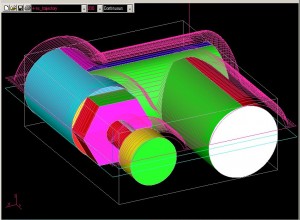 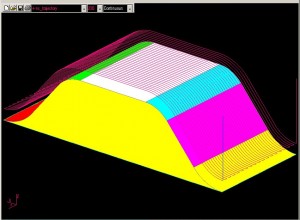 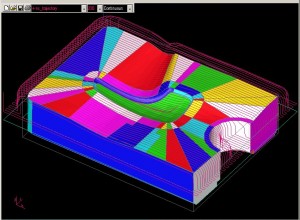